We would love to hear from you!
Let us know what you have been up to!

John Costello entered Jet in the Nov 4, 2018 AIOC trial put on by the Nanaimo Kennel Club.

John's thought was that if Jet did well he would enter Jet in the Nov 17/18 NKC CKC trial, as a "day of" entry.

John decided to go for it at the CKC trial

This was their last event of the season, they will have to wait until next season to see about getting that fifth pass that will give them OTCHX. 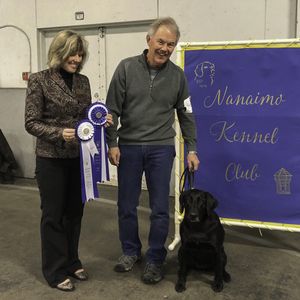 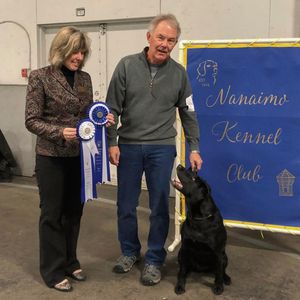 IPLRC was pleased to present a Competition Obedience Workshop by Janice Gunn on April 8 & 9, 2017.

IPLRC and Greater Victoria Dog Obedience Training Club members worked together on Sunday evening, September 11, 2016 to sweep and power wash the floor of our training facility, the RCMP barn at the Saanichton Fair Grounds. The IPLRC and GVDOTC were more than happy to get the training facility ready for students and dogs for the start of fall classes. 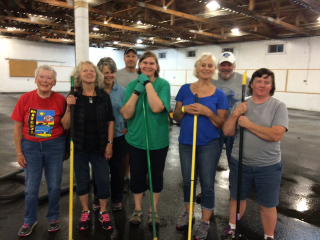 The 2nd Annual Charity Drive held on May 28, 2016, to support the Pet Food Bank at Our Place was a resounding success!
It's so heartwarming to see what two dog Clubs, Vancouver Island Dog Fanciers and IPLRC when working together to make a difference can accomplish! A huge Thank-you to the volunteers from the Island & Pacific Labrador Retriever Club who manned the booth on Saturday in the pouring rain and wind.

The support from everyone who donated so many wonderful items of food, toys, beds, leashes, collars, shampoo, brushes, water dishes and food bowls was overwhelming. THANK-YOU! All your kind donations are very much appreciated by the owners of pets in need. Your donations have been delivered to The Pet Food Bank at Our Place, and were so greatly appreciated! 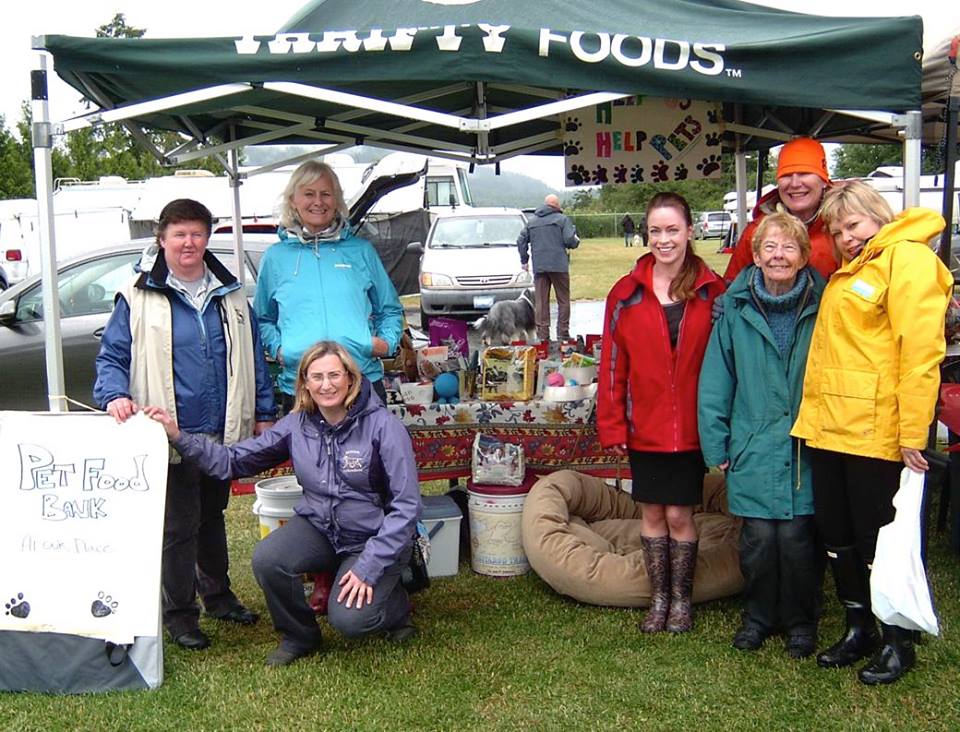 On Saturday, May 23rd, 2015, The Vancouver Island Dog Fancier's Association (VIDFA ) & The Island & Pacific Labrador Retriever Club worked together to support the Pet Food Bank at Our Place by accepting donations of food and pet accessories at VIDFA's Annual Dog Show held at the Saanichton Fair Grounds.
A big thank you to Kathy (VIDFA), Jessamine & Wendy (IPLRC) for spear heading the donation drive & helping throughout the day.
We were also very fortunate to have two delightful and enthusiastic young girls from our community volunteering with us. The girls drew the wonderful posters, accepted donations, helped deliver the items and helped to make the day so successful.
We thank them for their time and for their smiles!
Just some of the Items donated were bags of dog food, treats, food dishes, collars, leashes, crates, two bags of beautiful hand made crate mats & money, which was then used to purchase more items for the Food Bank.
Our community is made up of wonderful, caring people and we would like to thank everyone for the tremendous amount of support and the generous donations.
It was a privilege to work with VIDFA and a truly extraordinary experience seeing the generosity of the dog community and everyone coming together to help a worthy cause.

All donations were delivered to The Pet Food Bank at Our Place and were greatly appreciated.


At the May 2015 Vancouver Island Dog Fanciers Show held at the Saanichton Fairgrounds,
IPLRC held a Booster for Labradors on Saturday, May 23 , Judge Ms Honey Glendinning.
Prizes were offered for Best of Breed, Best of Opposite Sex, Best of Winners,
Best Puppy, Winners Dog, Winners Bitch, Best Veteran and Best Baby Puppy.

At the May 2015 Vancouver Island Dog Fanciers Show held at the Saanichton Fairgrounds, IPLRC offered an award in each trial for the highest qualifying score earned by a dog currently training at IPLRC by an IPLRC member at the Greater Victoria Dog Obedience Training Club's CKC Obedience and Rally Obedience Trials held on May 23 and 24.
Four Obedience and four Rally trials were held. 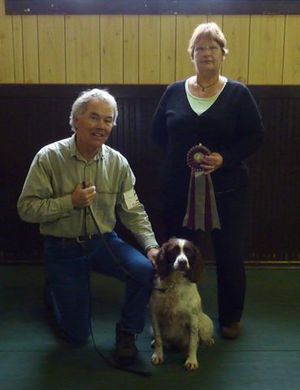 Hunter received his first AIOC Utility pass with a score of 190.
Hunter was also High in Class!

Hunter was entered at the "seasoned" level of the
UKC Hunt Test put on by the Salt Chuck Hunting Retriever Club in Comox, BC,
held August 25 - 26, 2012.

Hunter passed on Saturday and again on Sunday.

Four passes are required to earn a Title, so Hunter must
enter and pass two additional trials in order to complete this level.

Hunter was the only Spaniel entered in the Trial.

- click on the Thumbnail to see photos from the weekend - 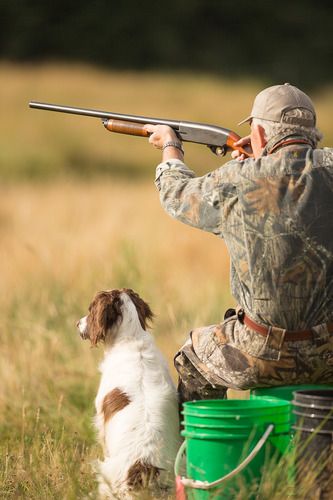 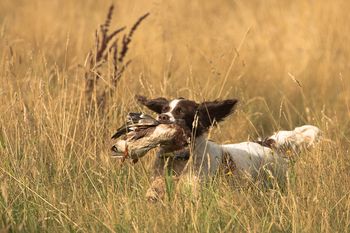 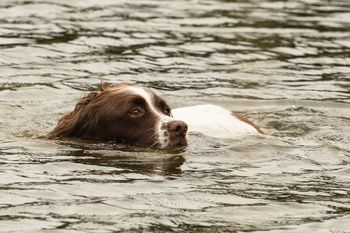 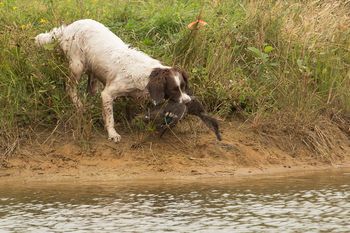 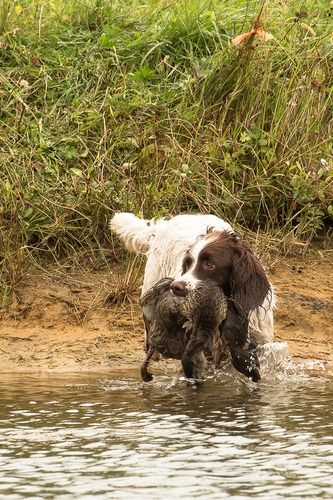 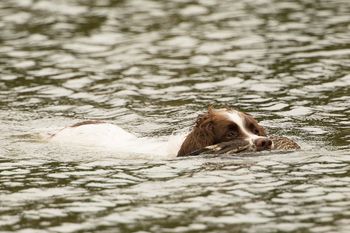 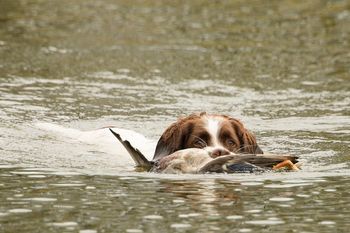 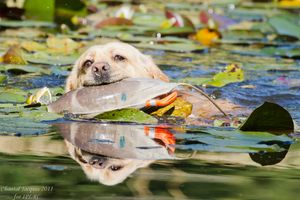 It has been an incredibly busy and rewarding spring for Taffy. At the GVDOTC Trial on May 27th, Taffy not only earned her CKC ‘CD’ title, but also a ‘High in Class’ award. On June 2nd at the IPLRC/Lakewood AIOC Trial Taffy achieved her AIOC ‘CD’ title.
Taffy earned her ‘Working Certificate’ (WC) on June 10th at The Pacific Rim Hunting Retriever Club CKC Licensed WC/WCI/WCX Test held at the Beaver Lake Ponds, Victoria B.C. We would like to acknowledge and thank all our Instructors for their patience and perseverance with special thanks to John Costello for providing not only his expert instruction, but also for providing the materials and an adequate supply of birds which enabled Taffy to master her basic retrieving skills. Also, we would be remiss if we did not take this opportunity to acknowledge and thank the Judges and volunteers who give so generously of their time to make these events possible.

CONGRATULATIONS! GLORIA AND TAFFY FROM IPLRC

Angus has qualified for his CKC RAE in Rally Obedience.

Angus is owned and loved by Anne and Duncan Morrison
( Caorunn )

ANGUS, WE ARE SO VERY PROUD OF YOU FOR PASSING YOUR WC!
WHAT A WONDERFUL ACHIEVEMENT!

DUNCAN, CONGRATULATIONS! FROM IPLRC FOR HANDLING YOUR BOY TO THESE TITLES!

DUNCAN, WE ARE ALSO PROUD OF YOU!